Charlie, sarflondondunc and Ross all told me about this great sign for Boyd Pianos that has recently been revealed on Shacklewell Lane in Hackney, presumably by the removal of a billboard. It is interesting on a number of levels, not least the quality of preservation

1. It is advertising pianos which is something you would never see these days on an outdoor billboard or poster site. This was obviously not unusual back in the day as further evidence from Blooms Pianos shows.

2. In addition to their main piano business Boyd also had a sideline in theatre box office ticket sales. Perhaps this relates in some way to them supplying pianos to theatres and this being a natural bolt on service they could offer to the theatres and the public?

3. The colours used are previously unseen in my experience. Very deep red but, more importantly, the use of gold for the lettering. This must have been very expensive. There may be a clue in the name of the company which did the sign, ‘Silversigns’ of Buckingham Road N1, as can be seen below. It would be interesting to know when metalic paint colours were first developed and by whom.

4. There is clear evidence of a previous iteration of this sign underneath creeping through as a palimpsest (see below). It would be interesting to know why they decided to move to a smaller font size, presumably to include more text but much of the palimpsest seems to indicate that the new and old signs were virtually identical. 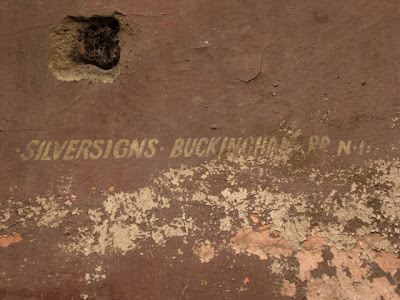 The signwriting company that did the signs. Does the name suggest that they had some speciality in metalic paint colours? 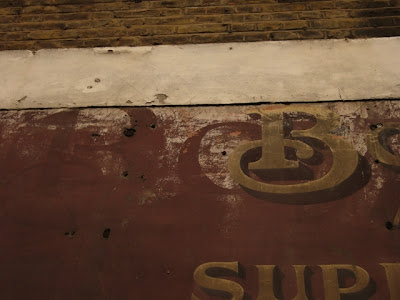 Main palimpsest, note the earlier ‘B’ to the left of the current one, in exactly the same font, just larger. 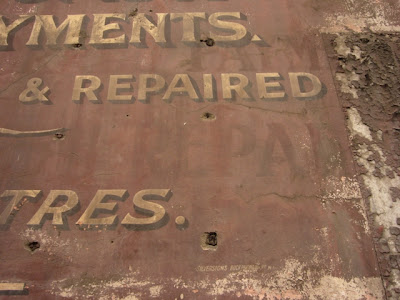 Second level palimpsest, again note the increased font size and that the previous ‘edge’ of the sign was further across.
Share